Say you’ve answered the call to be a Ground Observer. After signing up either at your local Civil Defense office or with your local GOC post, you would probably be handed a copy of the Ground Observer’s Guide and told to read up. Training was mostly done on the job by pairing new observers with a seasoned observer. 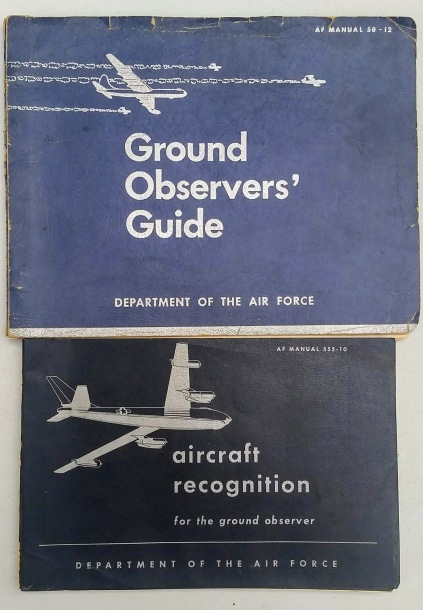 There were two versions of this guide that were issued. The first, AF Manual 50-12, was issued in 1951. It was bound with brass brads so that when the guide was updated, all you had to do is insert the pages in the appropriate spot. To my knowledge, this guide was never updated in this way. The first half of the guide is instructions on how to be an observer. The second half is a comprehensive list of planes by category – single motor, bi-motor, multi-motor, single jet, etc. These lists include US planes, ally planes from places like France, Italy, and the UK, and enemy planes mainly from the USSR. It would be highly unlikely that a non-US or Soviet plane would be seen in the US but it pays to be prepared, right? 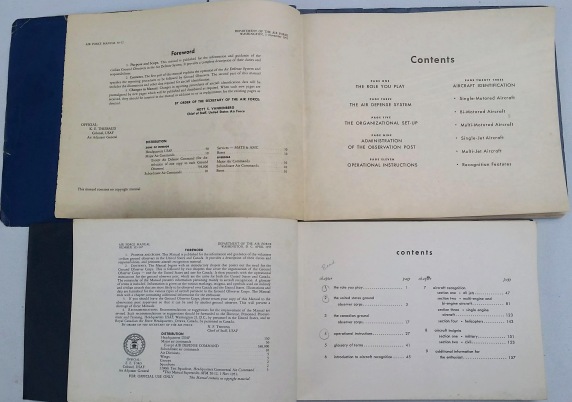 The second guide, AF Manual 358-10, was issued in 1955. It was smaller in dimension than the 1951 manual but had new sections and updates. The new sections included the information for the Canadian Observer Corps, since the program was run in conjunction with the Canadian AF in North America. Similar observer programs were run in Great Britain and Australia. The plane list was expanded to commercial airlines from around the world with pictures in full color. There is also a new section on aircraft insignia since the updated Aircraft Flash form had a column for this. The last section had additional information for the “air craft enthusiast” and was an optional read.

Both guides included an overview of the air defense system and how ground observers played a critical role in filling the gaps in the radar grid. The guide also covered administration of the observation post, organizational structure of a post as well as within the whole of the AF, and sample forms that were used at the post.

From an updated section in the 1955 Ground Observer’s Guide showing aircraft insignia.

You can read an online copy of the 1951 Ground Observer’s Guide here. Update! An online copy of the 1955 manual is here. If you want a copy of your own, either manual is pretty easy to find on eBay. The prices vary wildly but I wouldn’t pay more than like $20 for a copy in excellent condition as they aren’t particularly rare or collectible, unless you are a nerd for this kind of stuff like me. You’ll often see them listed as a “WWII aircraft spotter manual” or other creative names. Sometimes I wonder if people do that to make them seem more valuable. Don’t fall for it. Search around before you buy to find the best price. Also don’t confuse it for the Recognition of Aircraft manual that has a plain cover. That is the WWII manual.

One thought on “The Ground Observer’s Guide”