First – an update: I’ve mentioned that the GOC had official advertising but hadn’t found any more information about that. Well, I recently received 2 copies of the Aircraft Flash magazine, the official newsletter/magazine of the GOC that was produced by the Air Force. The September 1955 edition has a huge article about advertising for the GOC. Yay! Upcoming post when I can dig into it.

Observers who completed 25 hours of service earned their insignia, called “wings”. These were tiny pins, about 3cm in length, that one could proudly display on one’s shirt or dress collar. Pins were awarded for observer, assistant chief observer, chief observer, supervisor, and filter center.

A collection of GOC wings

After 250 hours of service, members could earn service medals. After the initial medal, bars for hours completed were added on to it. The Observer’s Guide only shows hour bars to 2500 hours. The most I’ve seen in person is 1500 hours. The September 1955 issue of The Aircraft Flash magazine reports that Clifford Barker of  Atlantic Highlands, NJ, had logged nearly 5000 hours as post supervisor there. That’s nearly two and a half years of full-time work if he had been working full-time. I don’t know if he got hour bars for the hours over 2500 or they gave him a second medal and started over at 250. 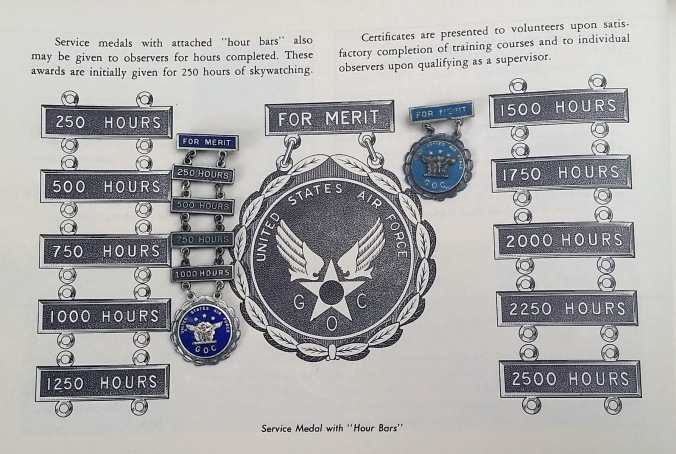 The observer wings are easy to find on ebay. They run anywhere from a few dollars to nearly $50. Since there were hundreds of thousands of observers, these wings are fairly common so you should be able to easily find them for $10 or under. The filter center wings are also fairly common and again, can go for a few dollars to much more. Keep your eye out for the best price. They pop up all the time. The other pins are not as common but should not be that expensive if you keep your eye out. Many times these pins are labeled as “WWII”, which they are not. Make sure you are getting the actual GOC pin and not the Aircraft Warning Service Pin, which is a similar size and shape but from WWII.

One thought on “The Ground Observer Corps Gives You Wings!”